Choosing the right Self-Adhesive Vinyl for your HP Latex printer

Firstly, we would like to clarify that there are no “good” or “bad” SAVs. We could say, rather, that there is a more appropriate type of SAV for each application type.

To determine which SAV will work best for your application, it is helpful to understand the differences between the various types of SAV (cast and calendared, polymeric and monomeric).

Cast film is produced by dissolving the following: PVC plus additives for flexibility (plasticizers), color (pigments), UV absorbers etc., with a solvent. This mixture is then poured on top of a casting web, creating a fluid paste. Afterwards, this film is dried in an oven, the solvents are evaporated and a thin and flexible PVC film is created. During this process, the film does not suffer any mechanical stress and this results in a film that can withstand considerable elongation (without becoming distorted), high temperatures (such as that used in thermoforming a sign), and extended exposure to sunlight without losing flexibility, cracking, fading or pulling away from curves or tight corners such as those that are commonly found on vehicle wraps.

The calendared film is made using similar components as a cast vinyl but it is made using a different process. To create calendared films, a PVC paste passes through calendaring rolls that apply heat and pressure to the paste until a thin film is created. The calendaring process determines the thickness and surface finish of the film. In this case, the film suffers internal mechanical stress when manufactured, and that’s why, when heated, calendared PVC films tend to shrink and return to their initial form.

Calendared films can be classified into two main sub-types: Monomeric and Polymeric, depending on the grade of plasticizer used.

Monomeric SAVs use plasticizers with a lower molecular weight, so they are less stable when it comes to ageing than polymeric SAVs. Monomeric SAVs can be used on applications requiring outdoor durability of up to 3 years.

Polymeric SAVs have longer and higher molecular weight chains, allowing for less transformation of the film and more chemical stability. In general, Polymeric SAVs are suitable for applications requiring outdoor durability of up to 5-7 years. 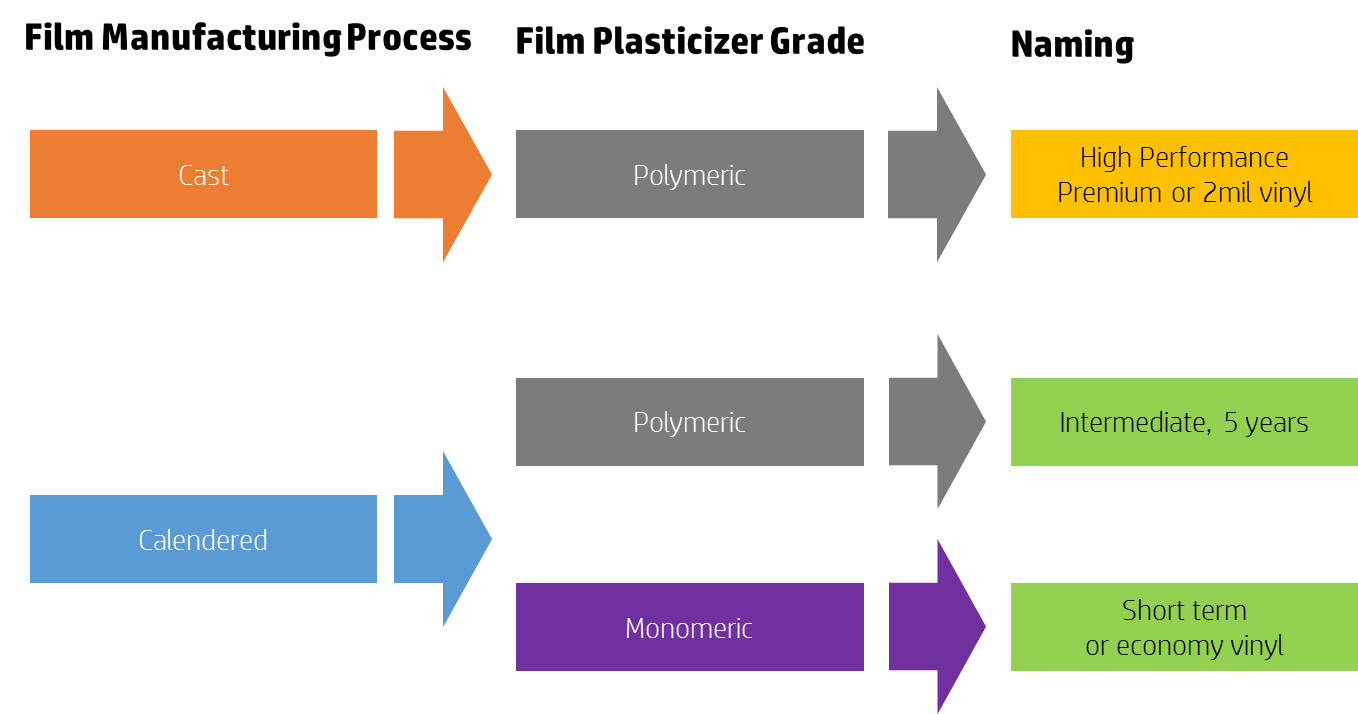 Let’s look at how SAV films are generally classified:

When selecting a SAV to use for your application, the following questions below may help you to select the right substrate:

The following table provides a summary of which types of SAV film are best-suited for a given application:

HP always recommends using certified media that is compatible with your HP Latex printer and inks. Certified media testing is based on key areas such as print quality, printer-media interaction, and outdoor durability.

The HP Media Locator is a searchable database of certified media, where one can filter by printer, media type, manufacturer and application to find the right SAV for your application.

The media presets can also be installed through the front panels of the printers or IPS (the printer’s PC) on the Search substrate online from the drop-down list.

Now that you know the perfect match (SAV film and print job) and where to find it, it is time to think big and generate new business opportunities. Here is a table of different self-adhesive vinyl applications that you can print with your HP Latex printer: