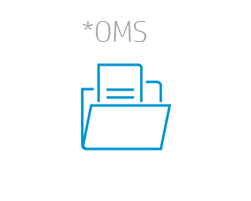 OMS files refer to the media profiles that are optimized to make a certain media work on a certain printer.

Every file is compressed, encrypted, and signed in case it will be published by HP, and is composed of 3 (or 4) main elements:

The fact that the OMS files primarily determine the mechanical settings of the mechanics of the printer is what makes the files unable to be shared among printers of different families.

In short, OMS files (identified by the file extension .oms) are files defined by HP and used across all the HP large format products that store mechanical settings, print modes, color reference and, in some cases, ICC profiles. The fact that the mechanical settings are dependent on the product family makes unable the sharing of media files across printers with two exceptions: between the HP Latex 1500 printer and the HP Latex 3000 Printer series, and with the HP Latex 500 Printer series, that accepts OMS files from every 3rd generation HP Latex printer.